Green sea turtles eating more plastic than ever, researchers say. Endangered green turtles are ingesting more man-made debris, including potentially lethal plastic products, than ever before, a new study has found. The study, published in the journal Conservation Biology, showed that six of the world’s seven species of sea turtles have been found to ingest debris, and all six are listed as globally vulnerable or endangered.

All the Cool Critters Come out at Night! 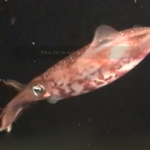 Video of the Week: Whale Shark Encounter
Scroll to top